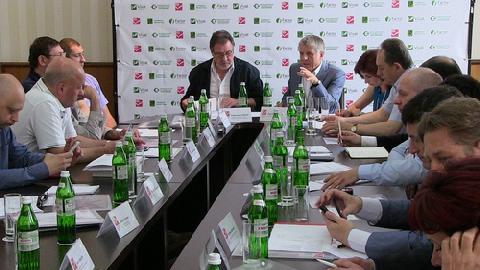 On May 28-29 in Kharkov, during the first book festival Kharkiv BookFest, “Knizhkova Rada “took place.
Ukrainian book business was represented by the heads of leading publishing houses (“Ranok”, “Vivat”, “Old Lion Publishing” and others.), the Director of the Lviv Forum of Publishers Alexandra Koval, ther Director of the Association of Book Publishers and Distributors Alexander Afonin, and the president of the Group of companies “Factor” Sergei Polituchy and others. The meeting was also attended by the People’s Deputies of Ukraine Yuriy Lutsenko and Alexander Kirsch, the Chairman of the State Committee for Television and Radio Broadcasting of Ukraine Oleg Nalivaiko, the vice president of the Frankfurt Book Fair Tobias Voss.

The participants of “Knizhkova Rada” discussed the issues of further development of the industry, the methods to fight against the counterfeiting products and online piracy, the questions of reviving of the reading culture and so on. “The publishing industry, the Ukrainian book is still strategically important component for the government in the protection of our state and the preservation of its national and cultural values, the consolidation of society – said the Chairman of the State Committee for Television and Radio Broadcasting of Ukraine, Oleg Nalivaiko. The concrete steps to support national book market have been taken – was introduced a VAT exemption for Ukrainian books and the import duty on the Russian book production. Hope this will become a new impetus for the development of the domestic publishing industry”.

Together with the Vice President of the Frankfurt Book Fair Tobias Voss, the meeting’s participants discussed the conditions of participation of Ukrainian publishers in the most prestigious European exhibition.

The panelists agreed that “Knizhkova Rada” will become a permanent lobbying tool for supporting the Ukrainian book. According S. Polituchy, today the Ukrainian market is at a turning point. “After the introduction of VAT exemptions for Ukrainian books and import duties on Russian book products, it has developed a fundamentally new situation on the market, and we all feel that we are on the eve of growth. But at the same time, there are lots of restrictive circumstances, hindering this growth. And these problems need to be tackled by both business and government. “