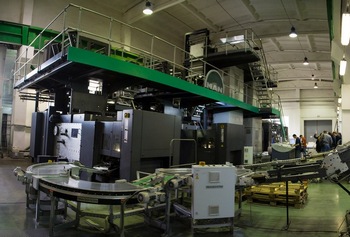 The printing house “Factor-Druk”, the biggest book and newspaper printing complex of Ukraine, has entered the market of the Czech Republic.
The first time on the printing facilities were printed 30,000 copies of cookbooks on the Czech and Slovak languages ​​on the order of the Czech publishing house.
The book dedicated to the national cuisine is made in hardcover as a deluxe edition with lots of colorful illustrations.
“Factor-Druk” plans to develop the established cooperation and calculates a whole series of projects for this customer.

“I think the quality-price ratio that we offer is quite competitive in Europe, even despite the high demands of publishers of the Old World. We are systematically entering the European market. In January, a large order was made for the Austrian publishing group. They are happy with the result, and now we are working on new contracts with them. Now we have the shipment to the Czech Republic, and we hope that this story will be continued as well. The parallel proposals are calculated for the Netherlands, Poland, Great Britain, and the Scandinavian countries “, – said the director of the printing house Olga Shapoval.