Vivat Publishing has summed up the first half of the year: 229 new products with almost a million of copies 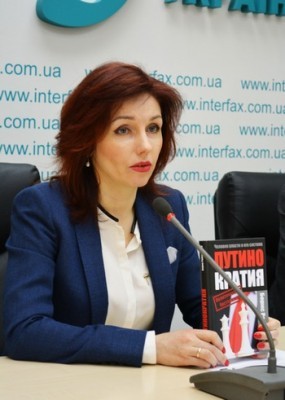 Vivat Publishing (Kharkov), which is a part of the five largest Ukrainian publishing houses, in January-June 2015 has released 1.03 million copies of books.

More than half of children’s literature are books on early learning, about a third are devoted to children’s creativity, others are encyclopedias and illustrated stories.

CEO of the publishing Yulia Orlova, summarizing six months, said that the period was marked by a series resonant events such as the arrival of a German journalist Boris Raytshuster, an author of political bestseller “Putinokratiya”, a presentation of a number of new publications on Book Arsenal, in particular the book of Russian writer- satirist Viktor Shenderovich named “The Blockade Of The Brain”, a study of French intellectual Antoine Arjakovsky named “The Discord between Ukraine and Russia”, and the book of Ukrainian political scientist Eugene Maghda named “The Hybrid War: To Survive and Win.”

“I especially want to note the success of the book “The Hybrid War: To Survive and Win”, written on the initiative of publishing: in the first month of sales was sold a third of the edition, which confirms the relevance of the issue and the quality of the product”, – Yulia Orlova said.

She also reminded that the publisher acted as one of the initiators of the new book festival Kharkiv BookFest and Book Council, brought together the largest representatives of book market in Ukraine. “We take an active social and professional position and I think it can also be attributed to the credit of the first half,” – she said.

Talking about the plans for the second half of the year, Yulia Orlova noted that “Vivat” is preparing a few surprises to Lviv Forum of Publishers. “In addition, in our operating portfolio there are almost all categories of books: social and political journalism, modern fiction, the symbolic children’s books for the Ukrainians, and gift albums,” – she said.

Vivat Publishing, created in the end of 2013 by the merger of the publishers “Argument Print” and “Pelican”, publishes books under the three brands:” Vivat “(gift editions, contemporary literature),”Argument Print”(Applied Literature) and “Pelican” (children’s editions). It is a part of the Factor Group of Companies and has more than a thousand of trading partners in all regions of Ukraine and neighboring countries, it cooperates with leading publishers of Great Britain, France, Hungary, Italy, Spain, Poland, Germany, and the United States.

Factor Group of Companies is the largest Ukrainian publishing and printing group, founded in Kharkov in 1991. Except Vivat Publishing, the Group of Companies includes the printing house “Factor-Druk”, a national leader in the production of books, pamphlets and periodicals; the Publishing house “Factor”, a leader of the professional periodicals in the field of accounting, taxes and law; the auditing company “Factor-Audit” and a number of other companies. The amount of employees is nearly 1.5 thousand people.